Haven’t we always been taught that horizontal stripes make you look wider and vertical stripes make you look taller.  Well, this may not always be true.  I have been reading studies done by Dr. Peter Thompson, Department of Psychology, University of New York and  articles dealing with the work  of Val Watham, winner of the BBC’s Amateur Scientist of the Year award  and ideas of the German doctor and physicist Hermann von Helmholtz

The whole discussion began in the 1800’s when Hermann von Helmholtz showed that a square made of horizontal stripes appeared to be taller and narrower than an identical square of vertical stripes.
He used this information to note, in his 1867 Handbook of Physiological Optics, that ‘ladies’ frocks with cross stripes on them make the figure look taller’.

Then somehow during the next one hundred or so years, his ideas became completely reversed and we have grown up thinking the opposite.

Dr. Thompson in his study, (I believe in 2011) had people compare women wearing horizontally and vertically striped dresses.  His results showed that when the two women were the same size, the one wearing the horizontal-striped dress appeared to people to be the thinner of the two.

Now then, I do not have a PhD after my name and I have never won any awards (I did win a sewing machine when I was a senior in high school) but here are my thoughts:

Not all stripes work the same.  If the horizontal stripes are small like the ones in Katy Perry’s dress, the eye is tricked into thinking the body is thinner and taller.

But if the stripes are larger like the ones in the dress worn by Eva Mendes, the eye stops at each break of dark and light and adds weight.  Consequently, she looks larger than she is.

This same principle works with any break in color or distinct break in the line of a silhouette.  I had a professor once tell me that when the eye hits a “break” it adds ten pounds.  With this idea in mind, be sure the “break” comes in a place where you can afford to add ten pounds.  For example, this contrasting jacket and pant adds 10 pounds to my hips. My butt is somewhat flat, so ten pounds is OK. 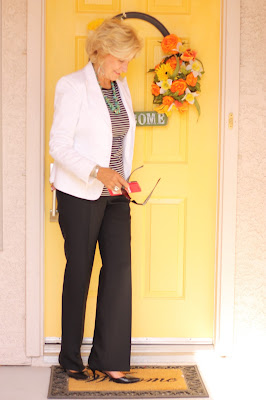 You may recall that there was a time period when Hillary Clinton was wearing pant suits in a variety of colors, but all cut the same.  The bottom of her jacket or the silhouette line break  hit just at the widest part of her hips.  This was not particularly flattering.

Thankfully, she has a new designer who has put her in an A-line silhouette with her jackets coming below the widest part of her hips 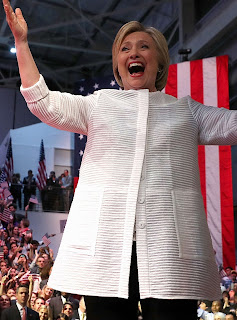 Conclusion:
1.  watch the size of your horizontal stripes
2.  thinner stripes make you look thinner and taller
3.  wider stripes may add weight and make you look shorter
4.  be aware of "line breaks" both in color and silhouette.  Weight is added at the point of the break.

Look at what I just found at Target.  It is only $12.00.  I can't wait to wear it.  I bought a large even though I usually wear a medium, but since it is from Target, I bought a size larger (in case it shrinks).  It is a cotton / spandex / modal blend.  It is extra long in length ..... perfect for us tall girls. 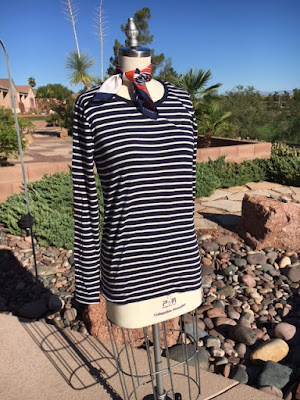 
Def:  modal -  a type of rayon, a semi-synthetic cellulose fiber made by spinning reconstituted cellulose, in this case often from beech trees. Modal is used alone or with other fibers (often cotton or spandex) in clothing.